Newer carbs now have an adjustment?

Hammermechanicman said:
I should have sent you my 1990 gmc pickup. 1 ton with 350 engine with TH400 trans without lockup and 3.73 gears. Terrible year for engines. 9 MPG empty or with a 2000 lb camper in the bed and towing a boat.
Click to expand...

Boy that great fuel compared to my first truck (1973 model) that barely got 5 mpg highway. No wonder I had two 30 gallon saddle tanks and a 15 gal reserve tank. Boy those tanks came in handy during the early 80's gas shortage. Retire it when I got a 1967 Chrysler 300 with 440 engine which I had getting around 25 mpg highway when I sold it. Not bad for Holley 4 barrel. Just didn't floorboard it much as the tank tried to imploded.

I just wish I could work with these new electronic controls as the 2000 is only getting 17 MPG combined. But EPA has ban about everything that I used to increase the fuel economy now. But I still looking for a mild racing cam and a set of variable duration lifters. I still couldn't tear down the engine even I had the parts as it is my only vehicle at the current time.
.

My hot rodding days are over. I used to like to work on cars. Now they are a PITA. Couple weeks ago replaced a coil pack and plugs on my son's xterra for a misfire problem. Dang bigazz plastic intake plenum made 1 plug take longer than the other 5 put together. Now i just hot rod chainsaws. Cheaper and easier on the my back.
B

WE are getting way off track but most of the L300's we ran for the delivery business that were not smashed beyond use did better than 600 K ( km ) before it was time for a rebuild.
We never bothered because a 1/2 cut from Japan with an almost new 4G63 was less than the price of the rebuild parts .
These were all running LPG and the only real problems we had was if the drivers did not keep the valve saver tank topped up so the valves ended up burning.
The really stupid thing was we fitted 2 vans with forklift LPG engines that got around 20 km / liter comparred to 8 for converted engine .
When one of these vans had a prang the insurance company did not honour the claim because that engine is not certified for automotive use so much for reducing pollution .

Hammermechanicman said:
Carb adjusting tool? No sir, of course i don't have any. That would be illegal. I would never try and adjust a carburetor. Yes sir, that's my story and i am sticking to it.
Click to expand...

"What are those? No sir, those are not carb adjusting tools. Those are really dull ice picks."
B

I remembered working on a motorcycle with clogged pilot jets in the early 2000's. The pilot was concealed under an "EPA plug". Under this plug was an adjustment screw, but there was no outward indication, other than that the idle mixture screw was obviously missing. The trick was to drill and tap a #4-40 hole. After the tap broke through the 1/8" thick plug, if you continued to turn the tap, then the plug itself would be completely "jacked" out of its position. This revealed a "standard", infinitely variable pilot screw under the plug, which the owner was then free to access for cleaning or adjustment.

Another anti-adjustment method was found on my 2-stroke powered leaf blower. That carb had Hi and Lo mixture screws showing, but the head of the screws required a special nut driver to turn. Fine needle nose pliers couldn't get into the well deep enough to get a good purchase on the screw. In that instance I used a Dremel tool slitting disk and added my own straight slot directly into both the Hi and Lo screw heads.
Last edited: Dec 4, 2020
S

Hopefully you did both carbs.

Never have understood why someone would not simply buy the proper tools if they are in the repair business; especially as they can be gotten for $15. It is a heck lot of less work and mess. 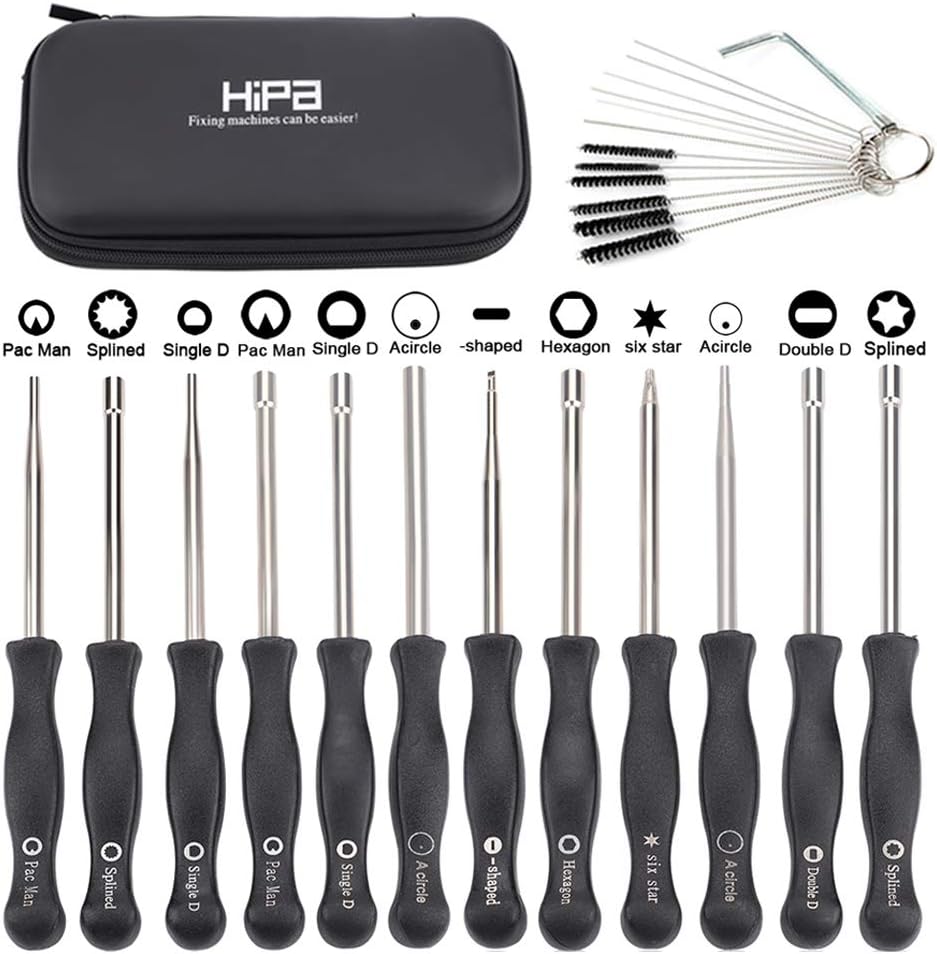 Of course I threw away cleaning brushes as they way too big for most cubes and rotaries.

Gee...what are those things?
Yeah the brush are useless for carb. I got a torch tip cleaner for jets. I am amazed at what some folks have done to try and adjust a carb. Or should i say butchered.
S

Okay I had a little spare time this morning since it is raining to research the carburetor posted about. First it is a clone sold on Amazon. Second it is the adjustable version of the carburetor which Honda actually produces their own version. It is used several of GCV190 engine versions but not on all the GCV190's. The non adjustable version are ran only at max rpm spec and and no idle mode or variable speed settings.

What is happening is the vendor is just selling the adjustable version in place of the fix jet version.

StarTech said:
Hopefully you did both carbs.

Never have understood why someone would not simply buy the proper tools if they are in the repair business; especially as they can be gotten for $15. It is a heck lot of less work and mess.

Of course I threw away cleaning brushes as they way too big for most cubes and rotaries.
Click to expand...

Those tools have come in handy many times.