I have this 40 volt cordless trimmer and have had some trouble finding a replacement spool. I contacted Poulan Pro and they couldn't find one, but eventually cross referenced and found one that they thought would fit. It wasn't even close. I found no reference on the internet that answered the question, but there were some Poulan Pro spools for other models that appeared identical. I took a chance and ordered one and it is a match, so I just wanted to post something that might answer the question when others might ask.

The SKU for the matching spool is 9527111636. A search of the Poulan Pro website indicates that this is the same spool used in several other Poulan Pro models including: 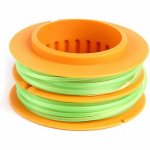