New member with a question about my Black & Decker CMM1000

I'm a new member to this forum and was hoping for a solution to a problem I'm having with my mower. A little background on my mower...I own a Black & Decker CMM1000. First and foremost, I *love* it. Secondly, my father purchased it for himself in approximately 2000 and I inherited it after he passed away in 2006 (part of the reason I love this mower as it's a tangible connection to my father, who I was very close to). I am simply an average homeowner with an average yard and my (Dad's) CMM1000 has been steady and outstanding workhorse for the past 16 years total and the last 10 years in my hands. Despite all the reported issues, recalls, and fixes surrounding this model mower, I have never had a single problem with it in all the years we've owned it. It has worked perfectly.

Fast forward to 2 mo. ago when I went out to mow my front lawn and discovered that the batteries in the mower had finally expired and would no longer hold a charge (I've always left the charger plugged in between mowings and have never had any issues in the 10 years that I've had it). After gathering information and reading a number of postings on the web, I decided to purchase a set of 22 mAh replacement batteries from one of the online websites selling replacement batteries for this mower and swap them out myself as it looked to be a simple, straight forward job. Apart from a less expensive alternative to purchasing a new mower (and probably not as good...), it was a way to extend the life of this great mower and also allow me to keep a very sentimental connection to my Dad. Unfortunately, there's been a hitch in this grand plan. As a matter of record and background, the mower was working perfectly, both charging and running, prior to the original batteries going flat. After I received the new batteries, I *carefully* installed them, reassembled the mower, and plugged in the charger to charge overnight (red charge light came on when plugged in as per normal), with the intent of mowing my lawn the following day. When I came out the following day to use the mower, I found the charge light green (as if fully charged like it would normally indicate), BUT the meter was still deep in the red as if the batteries had never been charged. I thought perhaps that the meter had failed somehow (again, despite everything working perfectly prior to replacing the batteries) so I unplugged the charger, slotted in the plastic safety key and attempted to start it. Predictably, no luck. In my state of confusion, I removed the safety key and plugged the charger back in. Again, the meter was bottomed out in the red on the meter and the red charge light came on, so I left it plugged in and decided to monitor it throughout the day. Surprisingly, I came out a half hour later to check on it and the charge light had turned green again as if fully charged, but the meter was still bottomed out in the red and the batteries were still had no charge on them. So, here is my dilemma, I'd *really* like to keep this mower, partially because of it's sentimentality, but also because it has been an *outstanding* mower. However, I'm at a loss to explain why it's no longer working after carefully installing new batteries intended as direct replacements. Beyond the fact that I really can't afford to purchase a new replacement mower right now (and for the previously mentioned reasons, really don't want to), I haven't seen any new cordless mowers currently made that would be as good or better than my CMM1000. I've also already invested $100 in the new batteries and $25 dollars in a new blade for the mower that I'd *really* like to see work. I've been borrowing my neighbor's gas powered mower for the last 2 mo. and, apart from my personal feelings about how the gas mower is impacting the environment, would like to stop imposing on my neighbor and (hopefully) resolve the current issue with my CMM1000. Can anyone, hopefully, offer an answer to my problem, given current circumstances and investment? I would be most grateful to the LawnWorld community for any solutions. Thank you.

Get a new charger. Go to the place you bought the batteries and ask them what battery charger they would recommend.

Welcome to the forum!

I'm going to move your thread over to the Black & Decker section in case you need more advice.

BlazNT said:
Get a new charger. Go to the place you bought the batteries and ask them what battery charger they would recommend.
Click to expand...

Hi, Chuck. Thank you for the response. However, the charger is the original B&D one that came with it and has a proprietary plug on it. Do they make appropriate capacity aftermarket chargers with that plug end on them? I really don't want to have to get into snipping plug ends off and modifying/wiring into another charger as I don't even remotely have enough time to get that involved in it. Plus, with no guarantee that it would work (especially if I had to modify it), I couldn't return it at that point if it didn't. Your thoughts?

Catherine said:
Welcome to the forum!

I'm going to move your thread over to the Black & Decker section in case you need more advice.
Click to expand...

A couple of min you can make you own adapter by going to auto parts store and picking up wire connector. Deturman what pluges are inside the lawn mower charger port it will normally be one of the 2 I will put pictures up. get some left over wire and creat your own jumper wires. Connect when needed to charge. 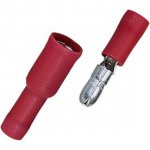 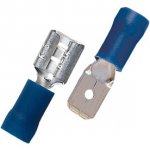 You will end up with something like this. You will need 2.

BlazNT said:
You will end up with something like this. You will need 2.

Thank you for the input, Chuck. I'll look into a different charger, but before that, do you think the problem is the original charger itself or possibly the charge circuit in the mower getting confused by the upgraded 22 mAh capacity batteries (the originals were 17 mAh)? It would surprise me if this were the case as all the other postings I've read around the web seemed to imply that the upgraded 22 mAh batteries were a direct swap out with no charging issues once replaced. I just don't want to keep pouring money into my mower if, when all is said and done, is going to end up costing me as much as simply purchasing a new cordless mower. I'd much prefer to try and specifically identify what the problem is and fix it rather than throwing potential ideas (and money) at it until I figure it out. It would just seem kind of silly. Know what I mean? Still, I thank you *very* much for trying to help me out. Let me know what you think. Much appreciated. :smile:

No I think you lost your batteries because the charger was dead.
From what I have read the charger acts like its fine even when it stops working.

BlazNT said:
No I think you lost your batteries because the charger was dead.
From what I have read the charger acts like its fine even when it stops working.
Click to expand...

That IS weird. I've haven't read any posts mentioning the charger being an issue. When I plug in my charger the LED indicators work fine, both the red one indicating that it's charging and the green one indicating that it's charged, just no charge on the new batteries at all. Hmm, now I'm REALLY confused. Just don't want to buy a new charger unless I know that's *really* the problem. Will have to ponder this a bit more and do some more detective work with multimeter. Thanks, Chuck.
You must log in or register to reply here.
Share:
Facebook Twitter Reddit Pinterest Tumblr WhatsApp Email Link