When attempting to replace pull card assembly the nuts that need to be removed are spinning the bolts therefore I cannot remove nuts. I’m sure this is an easy fix but I have no clue. Thanks and advance.

Grind the bolts off.

slomo said:
Grind the bolts off.

Without the exact model number, I'm just guessing. But the exploded diagram looks like there is a stud that screws in the block, which then has the fan cover on it, then the recoil starter, and lastly the nuts. So the whole stud is unscrewing. If you can unscrew all three, then you can probably clamp onto the studs with visegrips and undo the nuts. If not, you grind off the nuts and replace them and probably the studs. Again, without exact model number to see exact exploded diagram this is all conjecture. 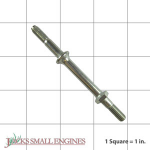 Remove the top engine cover. Do what you need to get the nuts off.

I believe the nuts have stripped the top threads on the stud... that's why nothing is happening. If the studs WERE spinning, then the top cover would soon come off... with 3 studs intact. In short, some gorilla has over tightened the 3 nuts WAY, WAY, WAY too tight.

You'll need to drill the stud out of the center of each nut. Then when the cover is removed you can replace the 3 studs and the 3 nuts. Then only tighten the new nuts to about 6 ft-lbs.... which is about what Jane (not Tarzan) can apply with a common 10mm "nut driver". DO NOT re-install those nuts with a wrench or socket, and definitely not with an impact wrench. This is an easy situation to get out of -- in my experience most Honda engines have this issue, on at least one of the three studs, if not all of them. Just simply keep unscrewing the nuts - the stud underneath will unscrew from the top of the engine, but that is OK. It is best to work each of the three nuts a few turns at a time in sequence, to keep the shroud fairly even as the studs unscrew. If you want, when the shroud comes off, clamp the stem of the stud with locking pliers while attempting to turn the nut off, to separate them. There is really no need to do this though. On reassembly, just screw in the studs to the engine again by turning the nuts. Applying some thread lock to the lower stud thread might allow the nut to be removed from the top of the stud next time. Let me know if that works with your motor; I've seen many of these and it is a common issue. No need to destroy anything!
You must log in or register to reply here.
Share:
Facebook Twitter Reddit Pinterest Tumblr WhatsApp Email Share Link